Earlier this month, best-selling fantasy author Brandon Sanderson posted some videos on YouTube of him writing, allowing us a glimpse at how a professional works:

As you can see it’s… well… boring. And not much different from the way most of us work, I reckon. Interesting, I suppose, because the art of writing is sometimes imagined to be a person just sitting there typing away endlessly. In movies, writers (and artists in general) are rarely portrayed to be putting that much effort into their work; the art just flows out of them. “As if he were merely taking dictation!” as Salieri might say. But, no, it takes time and thought. (Though I’m sure some writers try to let their first drafts pour onto the page faster and more sloppily.)

I have also taken about an hour’s worth of video of me writing my rough draft of Moonrise Ink back in 2011, except I include a small amount of narration. But I won’t be posting that anytime soon. 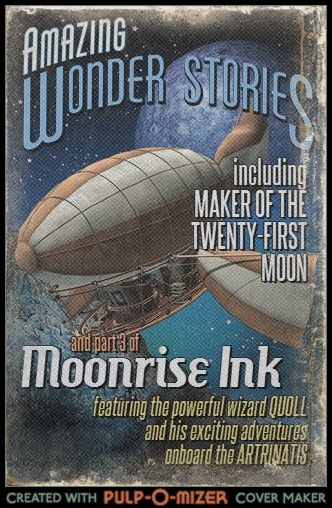 Another writer blogger out there was having some fun with the Pulp-O-Mizer, so I spent a few minutes playing around with it.  So I hope you like the cover for the pulp version of my novel.

So with my first draft of Moonrise Ink finished, I am working on revisions, trying to make sure the story is as solid and as engaging as possible.

My first draft is 105K words, which is a lot for a middle-grade fantasy. (And I’ve heard agents call it a “crowded market” so a high wordcount from an unknown author certainly won’t do him any favors.) However, as I read back through my draft and analyze how each scene fits into the overall story, I can definitely see that my first draft is overwritten.

Different writers might mean different things when they mention “overwriting.” When I say that my first draft is overwritten, I mean a few things:

1. My sentences can be clunky rather than concise. In the first draft, I am more focused on getting the story out of my head, so I will write a sentence as it comes to me, and it usually doesn’t come as concisely as it could. So my descriptions may be riddled with redundancies and unneeded adjectives. For example, I might write: “The stone gave off a blue glow.” But glows are, by their nature, given off, so that information is redundant. My writing would be more concise if I wrote. “The stone glowed blue.” I think there’s still something clunky about that sentence; it doesn’t roll off the tongue very easily, so I’d probably try to find another way to say it. But I think you see my point about redundant information.

There can also be a lot of useless words, such as: very, suddenly, really, instantly, however. They often don’t add much to the story.

2. I think overwriting can also be found in over-describing things, like rooms. At one point in my story, one of my characters is working in a laboratory in a palace. My description of the room goes on for almost a page. It may have been a good exercise to help me visualize the room, but so many details only slow the story down. It is especially easy to get into a habit of cataloging, simply listing all the sorts of things that are in a room. A few details are interesting, especially when they help set the mood for the POV character’s experience of being in that room, but it’s easy to go too far. A picture may be worth a thousand words, but a thousand words are not worth a picture.

3. Finally, the action in a story may be overwritten. I have scenes in which my characters are simply walking from one town to another, or flying in an airship from one place to another. So I think, “Well, they don’t do nothing on these journeys, so I better add some scenes to create the sense that time is passing as they journey on. I’ll have my characters argue about something or recall some backstory.” Amateur mistake. If it doesn’t have to do with the story itself, it can be cut. We can sum up a two week journey in a short paragraph. The reader won’t feel cheated because we’re moving the story forward.

There may be some more ways in which we writers may overwrite a draft, but these are the sorts of overwriting I’m noticing (and cutting) in my own first draft.

A couple days ago, I finally finished the first draft of my novel, Moonrise Ink! The first draft clocks in at 105,365 words. Of course, that wordcount will probably decrease as I work on a second draft. 105K words is a bit long for a middle-grade fantasy. Still, I don’t want to chop words for the mere sake of a shorter wordcount; it’s all about what the story needs.

So I’ll soon be working on a second draft. For now, though, I’m taking some time away from reading my own writing so I can see it with fresh eyes in a few weeks or so. In the meantime, I’m beginning to research the market, possible agents to query, and working on coming up with the best query letter I can.