Woohoo, the beginning of updates for a new novel!

Stormground is my tentative title for the first book in my new fantasy series, Moonrise Ink. I’m still in the plotting phase, which is proving tricky. The plot is more complicated than both The Dark Wizard and the previous incarnation of Moonrise Ink. The last novels I plotted that were this complicated were left incomplete. So we’ll see how it goes. There are four point-of-view characters, all of them teenagers, and I’m guessing this will be more of a YA / adult novel, not middle grade. Anyway, their storylines all weave in and out of each other, so it takes a good bit of organizing to make sure everything fits together. I’m in the scene-planning phase of plotting, which means I’m deciding what each scene will consist of and how they’ll be organized. It’s easy to start imagining how a scene might play out, and it’s tempting to rush through this phase just to get to the writing. I’m restraining myself though.

As I impatiently wait for responses from potential agents regarding the last novel I finished, The Dark Wizard, I wanted to see what some of my other stories might look like in book form.  I gathered three of my short stories, Maker of the Twenty-first Moon, The Final Dream of Samuel Shadows, and No One Was Abendsen, formatted them into a small 42-page book, and had it printed by Amazon’s CreateSpace.  I wanted to see what CreateSpace’s book quality was like, and I enjoy the idea of having my stories on paper for my personal collection.  It’s very short; altogether the three stories are only around 9K or 10K words, so having it printed just for myself only cost $5.85; about $2.50 or so for the book itself, and the rest for shipping.  I thought that was a fine price for having my stories printed up all fancy for my bookshelf.

Here are the results, presented in really unprofessional camera-phone pics: 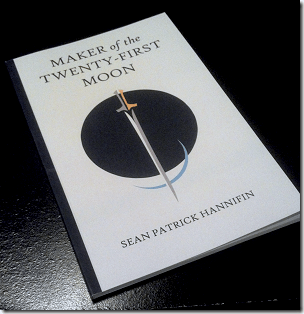 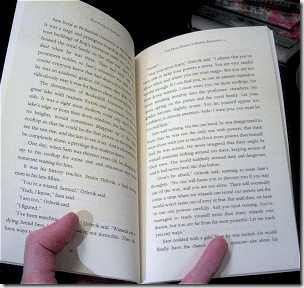 Although any avid book reader would still be able to tell this is a print-on-demand book, it really does feel nice in your hand.  CreateSpace’s matte cover feels very nice, as do its creme-colored pages, and the printing on the inside looks great.  It’s much nicer than a stack of manuscript pages.  And formatting the typography inside was actually rather fun, even if Microsoft Word can be annoying to work with at times.  (I had to copy & paste in all the f-i ligatures manually, for instance.  But I don’t have the funds for any fancier software, so Word will have to do.)

So this small collection of stories is now for sale on Amazon.  The title story was first published by Daily Science Fiction in 2010, but the other two stories were never published.

Of course, I don’t expect to sell many copies, if any at all.  There’s really no market for short stories from unknown authors.  But, in my opinion, it was worth the effort just to get a nice copy for myself.  From now on, I think I’ll do this with all my stories.  Most of the process is pretty easy, as long as you have the know-how to format something in MS Word or some other word processor.

The hardest part for me was probably designing the cover.  I’m no artist, so I decided on something very simple and iconic: a sword piercing a crescent moon, with a big circle behind them both for some contrast.  I drew it in Manga Studio with an Intuos tablet and then imported the image into Photoshop, where I designed the titles and the rest.  It took almost an entire day to get the shapes of the image right; as I said, I’m no artist.  Unfortunately, as a thumbnail on Amazon, it really doesn’t “pop” like a good cover design should, so it probably won’t attract much attention.  But I really love the way it looks in print.

Next, I think I’ll do same sort of thing with an unpublished 11K-word novelette I wrote back in 2009 called Dreamgiver.

But the real reason I wanted to try out CreateSpace, besides having my stories printed for my own collection, is because I want to try self-publishing a fantasy series.  (I’m still looking for an agent for The Dark Wizard, but all my research says that self-publishing other material won’t hurt my chances at all.)

For the new fantasy series, I’m revisiting the novel I finished in 2013: Moonrise Ink.  More accurately, I’m creating a completely new story in a new world with a new magic system while heavily borrowing my favorite elements from Moonrise Ink, including its main characters and its title, which will be the title of the series.  I’m still in the planning stage, which is of course the most awesome and exciting stage of story creating.

My current plan is to publish twelve installments of the series, one every month (which I’m sure I won’t be able to stick too, because I’m such a slow writer, but I’m telling myself that that’s the plan to inspire myself), each of which will be at least 30K words.  Each installment will be $2.99, and then every three or four months I’ll put out “collection” editions that will collect a set of three or four installments.

As a bonus, I’m also hoping to compose a soundtrack or two for the series.  Because that would be awesome.  I think.

This might be too ambitious for me to pull off, but I really need to plunge into a project like this, because waiting for agent responses is making me very restless.