My first draft of 23 Dragon Teeth is now at around 5,800 words, and I’ve just started the catalyst scene. I’m not yet sure if I’m on track for the 45K-ish-word wordcount I’m aiming for or not, but I’m guessing I’ll go over it. Which is fine, I guess. I’m still writing slower than I’d like to be, but my creative energy has, for the last week, been partly stolen by interest in an idea for a long epic fantasy saga, so I spent quite a few hours daydreaming and plotting that out. Still a lot of planning to do on that project, but I may start writing it later this year; it’s been giving me the new-idea-excited-obsession-feel lately.

I’ve finally started writing the first draft of my next novel, which I just finished plotting last week. It’s not the Son of a Dark Wizard sequel; it’ll still be quite some months before I start that. I’m starting another series, which will be three or four books in all. I’m not sure what the series title will be, but the first book will be called 23 Dragon Teeth. It’s about a teenager who’s descended from a mysterious family who have mind-control power over dragons, which he uses to try to save his village from intruders. Intruders who just happen to be… his family. Or what’s left of his family anyway. So there’s dragon magic, family drama, and sky dragon battles! A great recipe for a thrilling fantasy novel, I hope. I just finished the opening chapter this morning, so the first draft is officially underway.

It took me some four and a half months to finish the 40K-word rough draft for Son of a Dark Wizard. Since I’m officially going the indie-author route at the moment, I’m hoping I can be more disciplined about writing and finish this rough draft within a month. (I’m not going to stress it, though. Quality > Speed.) I’m again aiming for somewhere between 40K and 45K words; that wordcount seemed to work well for Son of a Dark Wizard; I think it’s a nice sweetspot for the sort of stories I want to tell.

I was watching a movie last night which began with a guy meeting a bunch of other characters. One character was clearly younger than the rest. The moment he spoke, I thought to myself, “He’s gonna die.”

By the end of the film, he died like storytelling clockwork.

How did I know he would die? Is it because I’m a genius?

Well, I’m sure that’s part of it. 😛 But it’s a trope I’ve noticed over and over again. If there is a supporting character who fulfills the “pure believer” archetype, he usually dies by the end of the film.

Who is the “pure one”? I’m still not quite sure how to define this archetype. Often, he’s the youngest of a group. Or he could be a “less-human” character, simple and closer to nature. He’s not necessarily “pure” in the sense of “innocence”; he maybe criminal or a murderer in a story about mobsters. He’s just the most “pure” out of all the hero’s supporting characters. As far as I’ve observed, he’s always a supporter of and believer in the hero, at least in the sense of supporting what the hero needs to learn. And often the main character supports him in return, perhaps being a mentor to him.

The pure one might die near the beginning of a story to serve as a catalyst for the hero’s journey. (“Noodles, I slipped.” Dominic in Once Upon a Time in America. The kid brother in Road to Perdition. Carl’s wife in Up.) If this happens, there will probably be reminders of him throughout the story to remind the hero of what he lost, such as an old photograph. The pure one might die at the midpoint or somewhere in the second half of a story to raise the stakes and remind the hero what he’s fighting for. (What Blake Snyder would call a “whiff of death”, perhaps?) Lastly, the pure one might take a martyrdom beat right before or as part of the climax. (Or right after the climax. I think that risks making the beat much weaker, but it’s been done.)

And, of course, the pure one’s death might be only symbolic in nature; actual death is too weighty for certain sorts of stories. And the pure one might be “reborn” after his brush with death to continue aiding the hero. For example, in Jurassic Park, the child Tim is resuscitate after he’s electrocuted and stops breathing. In The Lord of the Rings: The Fellowship of the Ring, Samwise almost drowns as he wades out to Frodo to join him on his quest to Mordor, and is saved just in time. (On a side note, it’s also a trope for these sort of rebirths, whether it’s the hero or a supporting character, to involve emerging from something, especially water; it seems to evoke something very primal, the sense of water bringing new life. Baptism, anyone?) In A Christmas Carol, Scrooge is shown a potential future in which Tiny Tim dies and decreases the surplus population. In It’s a Wonderful Life, the hero is shown an alternate reality in which his children are never born. These aren’t really “deaths” in the traditional sense, but they serve the same purpose: the hero must internalize (or become, or find, or learn, or whatever) what the pure character represents for him.

As I noticed this trope of the death of the pure one, I was of course reminded of its parallel trope: the death of the mentor. When the character has an older and wiser mentor supporting and believing in him, he often bites the dust as well. Obi Wan, Gandalf, and Dumbledore being some obvious examples. And there are plenty of stories in which the death of a parent or some supportive older character launches the hero on his journey. It seems like mentors and pure ones are kind of two sides of the same coin. They believe in and support the hero, but the hero needs to learn to internalize what they represent before the story’s end.

And I suppose that’s why they need to die. Because the hero has to find them in himself, as cheesy as that might sound.

As a dying pure one once said, “Stay gold, Ponyboy.”

Years ago, I wrote a post about character chemistry archetypes in which I defined the five most prominent character relationship archetypes I could think of. I thought of another one while watching the recently released film Big Hero 6 (which was a good movie, by the way):

The Human and the Inhuman / Less-human

Examples: Baymax and Hiro, Toothless and Hiccup, Stitch and Lilo, ET and Elliott, Terminator 2 and John Connor, The Iron Giant and the kid in that movie, Groot and Peter Quill & company, Ludo and Sarah in Labyrinth 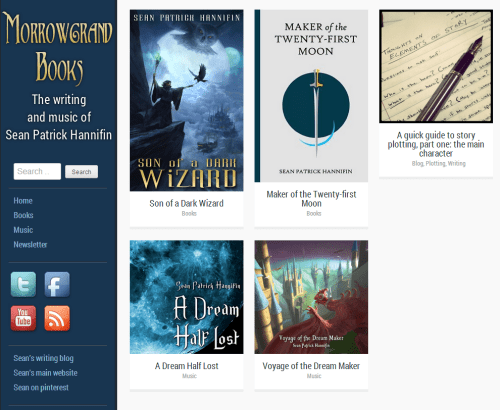 I spent most of the weekend redesigning Morrowgrand, which is intended mainly to host news and information for the products I release (as opposed to the informal blathering I do on this and my other blog). I ended keeping WordPress installed and modifying an existing theme that was simple and elegant. I think the results came out very nicely. I have finally released Son of a Dark Wizard as a free ebook on Smashwords!

A CreateSpace print-on-demand physical version is also almost ready. I’m just waiting for the proof to arrive in the mail, and then I’m sure I’ll tweak some things.

There are still some other things I need to do to get my whole “indie-published author” brand setup online. I’ve claimed a Goodreads author page, which I’m waiting for approval for. I need a nice photo of myself taken to upload to various sites. I need to create an Amazon author page. I need to redesign the Morrowgrand website. On my Facebook page, I changed myself from being a “musician / composer” to being an “author”, which I hope won’t too greatly anger the few people who’ve followed the page for my music.

I’ll admit this whole attempt at indie-publishing is a bit awkward. For example, you’ll notice that I refer to it as “indie-publishing” rather than “self-publishing”; even though they’re the same thing, the latter term is, for me, still tainted with the connotation of a wannabe author’s failure to find an agent. (Or perhaps I should say impatience with finding an agent?) Then there’s the issue of how “promotey” I should be; blathering about my fiction can feel like I’m trying too hard to get attention. (I guess that’s always a weird feeling when you’re trying to promote yourself.) And finally there’s that disconcerting feeling I get as I browse the competition, as I look through other people’s self-published books. It’s easy to feel hints of fear and doubt. Can my work actually compete with the established indie authors and popular books that are doing well? Is my storytelling actually as awful as some other self-published work out there? Will my work simply get lost and buried in the vast competition?

At the same time, though, there are indie-publishing success stories out there, and the rational part of my mind says there’s really no reason I shouldn’t be one of them if I can just be thoughtful, persistent, and patient enough.

Anyway, I’ll continue to work on these various author-online-brand things over the weekend. Then I should finally be able to get back to some writing projects!