Earlier this week I read a very interesting blog post by Rick Stump about Conan the Barbarian that definitely makes me want to read some Robert E. Howard. (I hope to anyway, since he’s on ‘Appendix N’.)

This is a complete digression of what that blog post is really about, but I find “The Hero’s Journey” and Joseph Campbell’s work in general to be quite fascinating, so I shall digress… the blogger writes:

Howard died well over a decade before The Hero With A Thousand Faces was published and I think that he would have sneered at it. As many more people before me have pointed out, Campbell’s theory of the Hero’s Journey is malarky. It is so very broad that it can’t be defended in a scholarly sense and yet it is so confining and predictable that when writers use it it hits everything with a Power Word: Bland spell effect. It fails to describe a number of rather seriously important myth cycles and attempts to shoehorn all of heroic narrative into a single pattern. 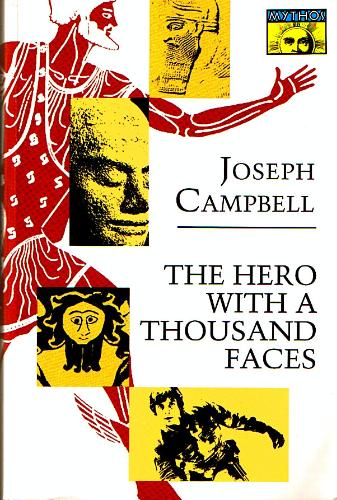 I think there are two issues here. First, what exactly is “The Hero’s Journey” anyway? And then, second, how a writer (screenwriter or novelist or whatever) might use (or misuse) it.

What is “The Hero’s Journey” anyway?

Granted, it’s been more than a decade since I read Campbell’s The Hero With a Thousand Faces, and I would not consider myself an expert on Campbell’s own views anyway, but my understanding of Campbell’s “monomyth” is Campbell saying this: Hey, I’ve studied a bunch of myths from around the world, and I’ve found some interesting patterns that many of them share; they tend to follow a particular model. As we find these similarities in the otherwise diverse myths from multiple cultures, what might this telling about being human?

Now, maybe that’s not at all what Campbell was saying. Like I said, it’s been a while since I read the book, and I don’t always find Campbell to be a particularly accessible writer anyway. (He seems to ramble and sometimes seems so interested in sharing the details of some myth that you forget what point he is trying to make, which he may not have even bothered to make clear in the first place.)

Also, note that “The Hero’s Journey” is about myths, not stories and narratives in general. There is some overlap, but whereas stories and narratives can be written by single authors for purposes of entertainment, myths emerge from groups of people and are generally shared in some sort of religious context. That is, the one who has learned the myth is meant to make a spiritual connection with it, not treat it as merely a fictional product. That is not to say one cannot make a spiritual connection with a modern-day novel. But that is icing on the cake for the author. You wouldn’t make up your own myth, much less try to sell a myth on Amazon for money. Not the sort of myths Campbell is considering, anyway. Hopefully that distinction makes sense.

Anyway, what makes the monomyth interesting (and a valid model rather than mere malarky) is that it describes similarities between myths. The idea is that, by virtue of finding these patterns across multiple cultures, the myths contain symbols that point to something bigger than themselves, something about humans and our relation to the universe. That is, hey look, there are spiritual truths in these myths!

Now of course one may argue about the particularities of the model Campbell proposes, such as whether it should or shouldn’t include the “stages” Campbell describes, or whether the patterns Campbell finds truly point to something bigger or are just coincidence. There is some subjective interpretation going on, an analysis of a myth is more art than science. (I’m not sure how one would make story analysis into a science?) Whether or not the model is considered to be “too broad” depends on what exactly one is trying to do with it. It is not meant to, for example, explain all myths ever. And surely it is not meant to generalize myths or trivialize their differences, any more than explaining sonata form or analyzing patterns in functional harmony generalizes or trivializes the symphonies of Haydn, Mozart, and Beethoven.

There is no final system for the interpretation of myths, and there never will be any such thing.

So I think “The Hero’s Journey” sometimes gets unfair criticism for not being what it never claimed to be in the first place. It is, simply put, a set of patterns found in a number of myths, with the underlying idea that these patterns are thus meaningful to the human experience beyond the specific myths they may be found in.

I’m not sure where in any of his books Campbell ever “attempts to shoehorn all of heroic narrative into a single pattern” or even advocate it. But, again, it’s been a while since I read the book. Maybe whether or not he’s “shoehorning” is itself a subjective matter?

The (mis?)use of the “monomyth” in Hollywood

So the story goes that George Lucas was influenced by Joseph Campbell’s monomyth while writing Star Wars. Star Wars was a big success. Screenwriters thought the monomyth was thus a “secret formula” for producing hits, or at least serviceable stories, and then a bunch of cliche predictable soulless awful stuff started coming out (and still comes out today).

Of course dull soulless films are really nothing new. When any art becomes commercial, “formulaic” artists emerge. The “formula” may change depending on the latest success, but the crime is the same: the writer depends on a “formula” (consciously or unconsciously) to the detriment of the final product. Blake Snyder’s “Save the Cat!” beats also get a lot of unfair criticism for this sort of thing. (The form he proposes is really another form of “The Hero’s Journey” but from a screenwriter’s perspective, which necessarily includes such things as pacing considerations, a side plot, and the statement of theme). Writers look at the “formula” and come up with the same cliche manifestations of the story beats and the resulting story is soulless, monotonous, and predictable.

When this happens, the blame really goes to the uncreative boring writers, not to Joseph Campbell or Blake Snyder, who merely shared patterns they had found. (Well, perhaps the ultimate blame goes to the audiences that keep buying such formulaic stories, but what does that say?) The story patterns they share are no substitute for soul or theme. From my perspective, they’re a bit like talking about methods for calculating vanishing points on a canvas to help you draw with perspective. They might give your painting some depth, but they won’t make it beautiful. That is, from a storytelling perspective, they can serve as insightful tools. They are not “formulas”… perhaps they may serve as “foundations” or “forms”, but they are not instructions on what must happen next. “The Hero’s Journey” is spiritual, not a plot template. It’s not about what the hero does physically, it’s about his (or the audience’s) spiritual experience.

So, in conclusion, I don’t think “The Hero’s Journey” is malarky at all, though I certainly agree that it can be misused when storytellers treat it as merely a “formula.”